If there is one lesson that 2020 taught us, it’s that no one knows what’s going to happen.

Imagine if someone with a crystal ball told you on December 31, 2019 that close to 400,000 in the U.S. would die from a global pandemic, that we would have over 20 million COVID-19 cases by year end, and that a government-ordered shutdown would force thousands of businesses to close, but don’t worry, because the S&P 500 will end the year up 15%. Would you have believed them? Probably not. Yet, that’s where we stand today.

Investors were willing to look past the negative headlines of 2020 and focus on 2021. And 2021 has plenty of reasons to be optimistic due to a resurgence in corporate earnings, a large fiscal stimulus package, and an accommodative Federal Reserve.

As you can see in the chart below, the market’s bottom coincided with a turnaround in earnings expectations for 2021. 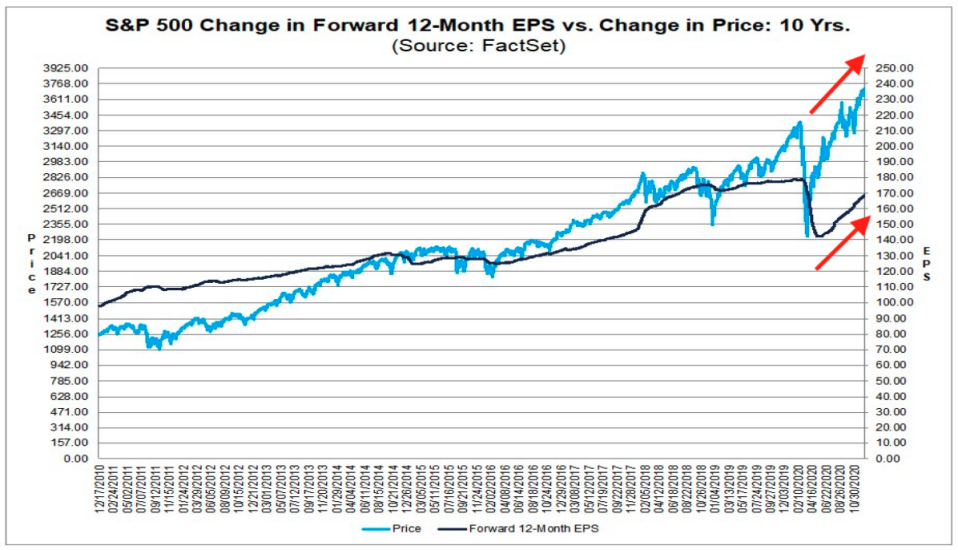 Consensus analyst estimates have corporate earnings growing at 22% in 2021 due to pent up consumer demand, a return in capital expenditures, and the need for companies to replenish inventories. Over time the stock market follows the path of earnings growth and the reopening is setting the stage for a big and exciting recovery.

While most market strategists were predicting a divided government (me included), the Democrats control the White House, The House of Representatives, and The Senate, and despite concerns over increased taxes, there is optimism for a major fiscal stimulus bill to help businesses and individuals who have faced financial hardship due to the pandemic. In addition, we very well could see a much-needed infrastructure bill.

Of course, none of this comes for free and a large stimulus bill won’t come without resistance. It’s important to keep in mind that even though the Democrats have control over the Senate, it has a slim advantage that includes an Independent in Angus King (I-ME), as well as moderate Democrats such as Joe Manchin (D-WV), Mark Kelly (D-AZ), Jon Tester (D-MT), and others.

The fiscal stimulus package in mid-2020 did a good job supporting the economy when activity was compromised due to government-ordered shutdowns of businesses, but COVID-19 is still with us and we need another injection to get us through the next six-nine months as the vaccine distribution is rolled out.

In response to the government-ordered shutdown, the Federal Reserve cut interest rates to 0% and committed to buying assets such as treasury bonds, mortgage bonds, and corporate bonds. This support provided ample liquidity to the U.S. Treasury, banks, and corporations, and supported valuations of stocks and real estate. While there is concern over heightened stock market valuations, interest rates are likely to stay low creating a supportive environment for higher-than-average valuations for the foreseeable future.

Last summer Federal Reserve Chairman Jay Powell publicly stated ….”we are not thinking about thinking about raising rates.” By all accounts, this is still the message as the Federal Reserve is committed to getting inflation above 2% and will allow the economy to run “hot” to stimulate the economy, support asset prices, and support full employment.

While vaccine approvals are encouraging, it could still be six to nine months before a vaccine is widely distributed, and the initial rollout has been disappointing. Six-nine months is a long time for the economy to function under the cloud of the virus, and a slower than expected rollout of vaccines could allow the virus to mutate, causing further spreading and delays in herd immunity.

A rollback of the 2018 tax cuts would undoubtedly provide a headwind for 2021 corporate earnings which could have a negative impact on hiring and capital expenditures. The incoming Biden administration is already proposing a massive stimulus package and the only way to pay for it is either higher taxes or more debt. I suspect it will be a combination of both. It is important to note that the positive economic impact from a large fiscal stimulus bill may very well exceed the negative impact of higher taxes.

While the Federal Reserve is likely to keep rates at 0% through 2021, they may slow (taper) their purchase of assets (U.S. Treasury, Mortgage, and Corporate Bonds). The last time the Federal Reserve announced a tapering was 2013, and the market quickly sold off close to 10% in the span of three weeks. We could easily see a “taper tantrum 2.0” in 2021 as the economy opens back up.

From a stock market perspective, 2021 reminds me of 2013. At the end of 2012 the 2008-09 financial crisis was still fresh in our minds, we had concerns over the European debt crisis, we had an accommodative Federal Reserve, we had a presidential election, the stock market was at all-time highs, and we had a legislative nightmare known as the fiscal cliff. Despite these concerns, the market continued to go up. We did experience a pullback during the aforementioned “taper tantrum”, but the market quickly recovered and 2013 ended up being an exceptionally good stock market year due to optimism, low rates, and an accommodative Federal Reserve.

What Are We Doing?

Like last month, we are positioning portfolios and investment implementations in the following way:

If you would like to speak about your portfolio in greater detail, please feel free to reach out to schedule a meeting.