Investors and media pundits can be an inconsistent group when it comes to the fear du jour, but inflation has been a persistent fear this year, and for good reason.

Recent data suggests that we just experienced the most robust 12-month inflation surge since 2008.

When stripping out the volatile food and energy components, core inflation jumped 3.8%. - the biggest 12-month increase in core inflation since 1992. 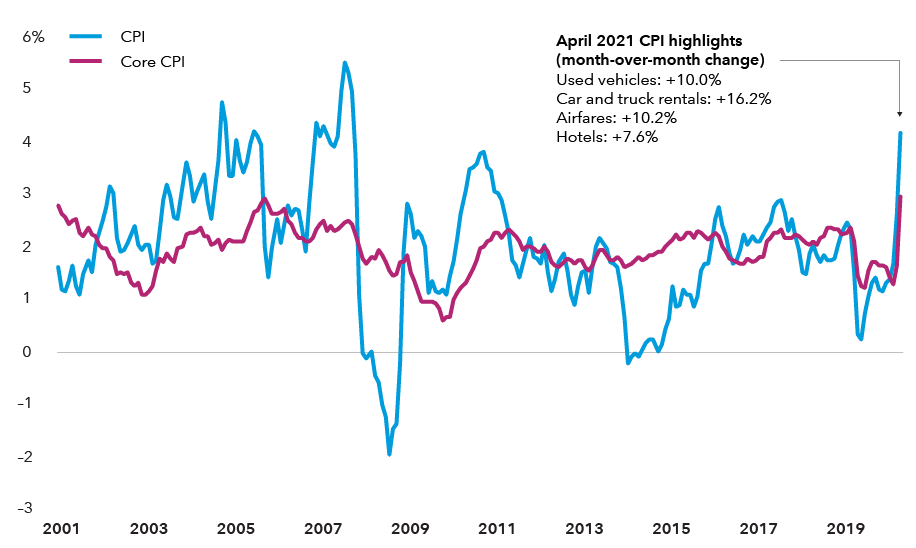 Inflation is no doubt a concern, and we’ve been adamant that runaway inflation is the biggest risk to this stock market rally. Why? Because an unexpected and persistent increase in inflation could force the Federal Reserve to hike interest rates sooner than expected, which would push up borrowing costs and would likely put negative pressure on equity valuations.

So, are the recent inflation numbers a transitory event or are we at risk of returning to the hyperinflation of the 1970s?

We suspect the former, although investors are unlikely to have a clear view of where inflation is headed for several months as we wait for the economy to fully reopen, supply bottlenecks to subside, and certain stimulus/relief programs to end, namely, the extended unemployment benefits and the suspension of mortgage and student loan payments.

The Federal Reserve has echoed this sentiment by announcing at their recent meeting that they are holding interest rates steady at 0%. Although it is important to note a change in their wording from “we are not thinking about thinking about increasing interest rates” to “we are now talking about talking about increasing interest rates”. A subtle shift in language, but important, nonetheless. The Fed has been consistent with their messaging since the start of the pandemic, but the inflation data and subtle shift in language could change the expected timing of an interest rate hike from 2023 to 2022. At least for now, it's too early to move that timing forward; the data is too volatile and the outlook is too uncertain for the Fed to make any major adjustments.

For the time being, it remains our view that the Federal Reserve will stay the course, and while we expect bouts of volatility, we also expect the interest rate backdrop to remain supportive of equity valuations.

So, when should we expect the next bear market?

If you look around your neighborhood, people are ready to get out and spend!

Thanks largely to rising consumer spending and trillions in government stimulus, U.S. gross domestic product rose an annualized 6.4% in the first three months of the year, and total U.S. economic output could return to pre-pandemic levels by the end of 2021, years ahead of expectations.

We are in an expansionary phase and stocks have historically risen 85% of the time on a one-year basis during expansionary periods. Technically speaking, the bull market started on March 23rd of 2020, and going back to 1957, the average bull market has lasted close to six years.

That said, the second year of a bull market tends to be choppier, with positive but moderating returns and periodic pullbacks (we have experienced four peak-to-trough pullbacks of 5% already this year and the market has been flat since mid-April). Going back to the mid-1950s, the average return in the first year of a bull market is 43.3%, compared with 13.3% in the second year.

2021 is following a similar path to 2004 (post tech bubble bear market) and 2010 (post the financial crisis). 2004 and 2010 were the 2nd year of a bull market and while returns in both of those years were strong, they were weaker than year one, and both came with heightened volatility.

And they still had several years of growth left.

Propelling this expansion are a strong housing market, robust spending, better-than-expected corporate profits, a healing jobs market, and unprecedented policy support from Washington and the Federal Reserve. This is all against a backdrop of reasonable stock market valuations (assuming interest rates stay low) and unattractive alternatives (where else can you get a return on your cash?).

As a result, we remain committed to our clients’ strategic allocations, with a tactical overweight to stocks over bonds.

If you would like to speak about your portfolio or wealth plan in greater detail, please feel free to reach out to schedule a meeting.